Hi guys, seems like a lot of new players are looking for a decent way to  run and play Clash Royale game on  iOS/Android device. Today I am going to show you the easiest way to do that and I will try to keep it as simple as possible!

Clash Royale is a freemium real-time strategy video game developed and published by Supercell (other game of Supercell is Clash of Clans & Hay Day & ….).

Clash Royale is a real-time multiplayer game starring the Royales, your favourite Clash characters and much, much more. Collect and upgrade dozens of cards featuring the Clash Royale troops, spells and defenses you know and love, as well as the Royales: Princes, Knights, Baby Dragons and more. Knock the enemy King and Princesses from their towers to defeat your opponents and win Trophies, Crowns and glory in the Arena.

Clash Royale is a tower rush video game which pits players in games featuring two or four players (1v1 or 2v2) in which the objective is to destroy the most opposing towers, with the destruction of the "King's Tower" being an instantaneous win. After three minutes, if both of the players/teams have an equal amount of crowns or none at all the match continues into a 2-minute overtime period and the player who destroys an opposing tower wins instantaneously. If no towers are destroyed during overtime, there is a tiebreaker, where all towers rapidly lose health, and the tower with the least health is destroyed. If two towers have the same health, there is a draw. After an update in late 2018, leaving a 2v2 match multiple times prevents the player from playing 2v2 with random players for some time.

In Clash Royale, players are ranked by their number of trophies. Players level up by gaining Experience  points through donating and upgrading cards. The highest possible level is level 13. The December 2018 Update added Star Points for excessive Experience when players reach level 13, and will award Star Points for previously leftover Experience.

Trophies are won or lost through multiplayer battles, a player wins a battle by destroying more towers than the opponent, or by destroying the opponent's King's Tower, resulting in an automatic "three-crown" victory.

In clash royale, players can join or form clans. Joining or forming a clan enables the player to engage in friendly battles and clan wars. It also unlocks the feature of trading and requesting cards from clanmates after becoming level 2. Clan members can also chat and share emotes with their clanmates. A clan has a maximum player limit of 50.

On April 25, 2018, Clan Wars were added. A clan war is separated into two days: 'Collection Day' and 'War Day'. To play in a Clan War, a Clan must have a minimum of ten players that are level 8 and above. On Collection Day, each player in a Clan gets to do 3 battles in a variety of game modes, which rotate every month. Upon completing a battle, the player earns cards, which go into their Clan's card collection. More cards are awarded upon winning a battle, and players earn more cards in higher Arenas. For the Clan War to progress to War Day, a minimum of 10 players need to do at least 1 battle each. On War Day, a Clan is matched with 4 other Clans with a similar number of participants and Clan Trophies. Each participant gets to build a deck using only the cards that their Clan unlocked on Collection Day. Card levels are limited to the player's card level and the amount of duplicate cards gained on Collection Day, with the lowest level having priority.

In July 2016, Supercell introduced a new Tournament feature. Tournaments are similar to normal battles, but all cards are capped at level 9. This feature is unlocked at player experience Level 5, but can only be played from experience level 8. Tournaments can only be created by using gems, and the creator can choose to make it password protected or open. Based on tournament performance, players are rewarded with tournament chests. As well as tournaments, there are two types of Victory Challenges, one in which the goal is to win twelve times while losing no more than two times and the other's goal is to play until you finish the entire challenge by winning all crowns or battles, regardless of losses.

In March 2017, "Leagues" were added to the game. Once above 4000 trophies, players are placed in one of nine different leagues ranging from Challenger I to Ultimate Champion. At the end of each season, players receive rewards based on the highest league achieved during that season.

Quests were added in the October 2017 update as a set of achievements where some players have to complete certain tasks to receive rewards. The Quests section also includes a free reward which is given to the player every 4 hours, up to three times a day. 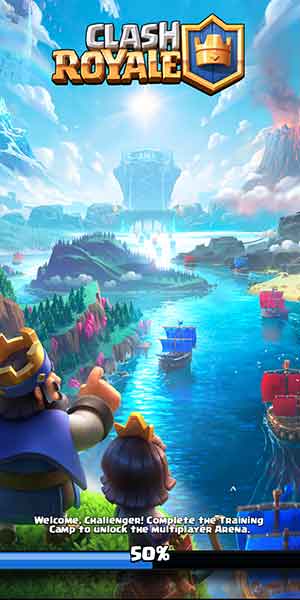 Step 2: Install Google play (If you don't install it) 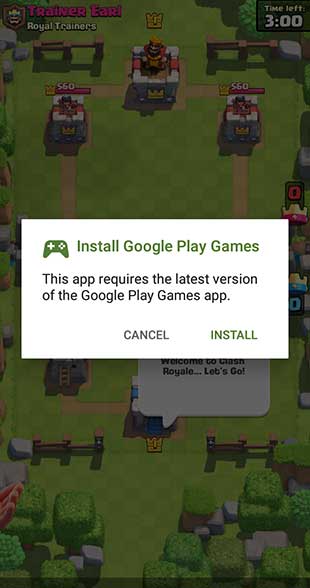 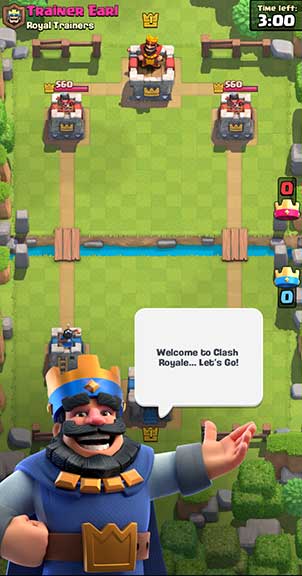 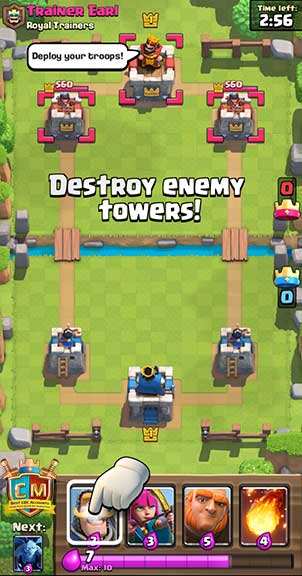 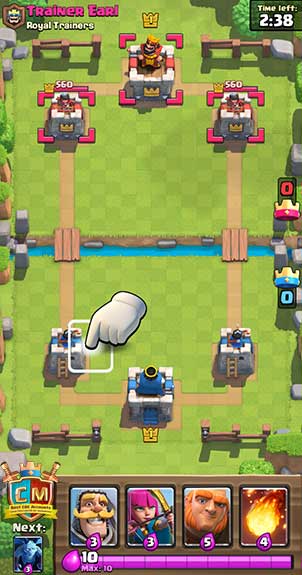 Step 6: You Won this battle of Clash Royale.

Step 8: Upgrading the Clash Royale card so it will strengthen your troops! 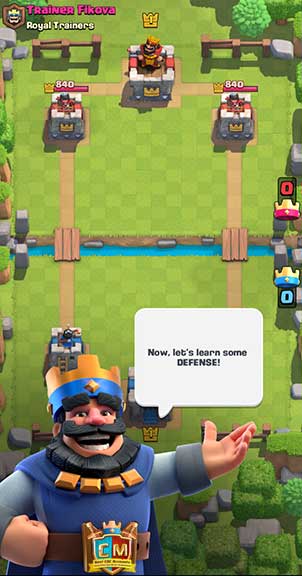 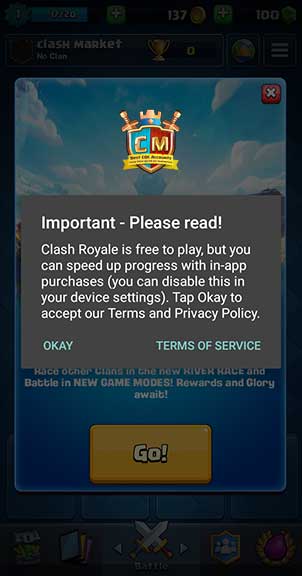