In its 2020 update, Supercell has focused on the electronic characters of the Clash Royale account.

In Clash Royale accounts, the cards are the same as the characters in Clash of Clans accounts.

What do you think about Elite Barbarians in Clash Royale? 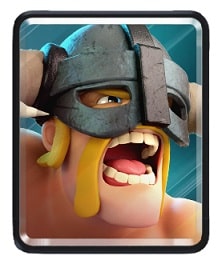 Elite Barbarians are most reliable as a defensive card turned into a counter attack, especially against tanks and troops that are one shot by a pair of Elite Barbarians, like a Musketeer. This allows them to push for a lower cost than if they were just played at the bridge (6 Elixir to counter 4, but the user will have two nearly unscathed Elite Barbarians counterattacking).

Since they spawn in pairs, they can be used for split pushing, with 1 Elite Barbarian down each lane.

Although Elite Barbarians have high damage per second, their health is mediocre, so almost all swarms can counter it for a positive Elixir trade. An Ice Golem with any other high damage support card (e.g. Minions) can easily take down the Elite Barbarians.

Splash units like the Bomber, Valkyrie and Dark Prince are amazing at countering Elite Barbarians when paired with Skeletons or Ice Spirit, diverting damage from your counter. The same can be said for powerful glass cannons like the Mini P.E.K.K.A and Lumberjack. Those small troops can be protected by Ice Golem, as well.

The Elite Barbarians are unlocked in a higher Arena (Hog Mountain), which means that the Barbarians can be obtained earlier and be leveled up more easily for use in ladder battles.

Casting Rage on Elite Barbarians can be even more deadly, as it amplifies their already Very Fast movement speed, making them even harder to react to. Despite the benefits, this strategy can leave the player with a huge Elixir deficit, as this combo is still susceptible to swarm.

An infamous combo is Elite Barbarians and Fire Spirits. As Fire Spirits have the same move speed as Elite Barbarians, they act as 3 portable Zap spells that have a smaller radius and aim automatically. They will clear out any air or ground swarm attempting to stop the Elite Barbarians, as well as providing considerable Tower damage once they reach it. However, it can still get shut down by a mini tank + swarm combo.

A high-risk, high reward move is to quickly send in Elite Barbarians at the start of a game right as you have 6 Elixir. This can be done more quickly by tapping the screen twice to skip the animation displaying the Arena, giving the player access to their cards more quickly. This is even more effective when their best counter is out of rotation, since they will have less Elixir to cycle to it.

A Rocket can completely destroy Elite Barbarians for a neutral Elixir trade. However, due to their Very Fast movement, coupled with the Rocket's slow travel time, it can be difficult and risky to use it successfully. Alternatively, you can use Lightning to cripple the Elite Barbarians and 1 supporting card.

Mini tanks such as Knight, Ice Golem, and Valkyrie can pull the Elite Barbarians to the center, allowing both towers to whittle them down for a positive elixir trade.

What do you know about Elixir Golem card in Clash Royale? 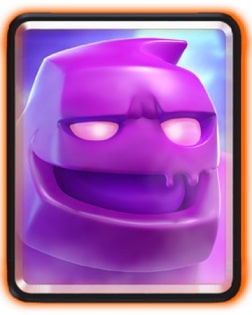 Counting its divisions, the Elixir Golem has the highest health-to-cost ratio in the game of a whopping 1196 health per Elixir point. This along with its low cost of 3 Elixir enables it to be the center point in many strategies.

The Elixir Golem also opens up unique strategies only possible due to this, such as a tank or a cycle deck with a big tank.

The Elixir Golem must be used with great care and planning, as it gives the enemy 4 Elixir when fully destroyed.

This can be offset in numerous ways - protecting the Blobs means that the opponent cannot destroy them and gain Elixir to begin with. If the opponent's Elixir is near-full or full, any destroyed Blobs will grant Elixir immediately but will not go past 10, meaning that some Elixir can be lost if a Blob is destroyed at 10 Elixir. Ensuring that the opponent's Elixir Golem counter is out of rotation also means that it'll take a long time to destroy.

The Elixir Golem's sub-units each have half the health of their previous form, meaning that for 3 Elixir, a player gets three Elixir Golems' worth of health if every unit summoned by the card is counted.

However, since each subsequent form raises the unit count, it makes the total health less effective over time. For example, The Log will bring down the health of each Elixir Blob enough so that the Princess Tower's arrow can one-shot them. When using spells to defend against an Elixir Golem push, try and save them for the last two phases to get the most area damage value.

As it divides, the Elixir Golem gets weaker but faster, turning from a tank to a swarm glass cannon over time. This means it can be used in tandem with troops like the Miner to tank for them and then be tanked for once it divides.

The Elixir Golem is capable of doing devastating damage to buildings unlike the other two golem cards, especially as it divides into more units. This makes it a good chip damage card, boasting high health, sub-units, and good damage for 3 Elixir.

If an opponent deploys an Elixir Golem, don't be afraid to spend more Elixir than usual to counter something of its cost - the Elixir provided by the Elixir Blobs will make up for that. If a cheap tank buster such as an Inferno Dragon or Mini P.E.K.K.A. is used, it may even be possible to make a profit in Elixir from the opponent's play.

It is not a good idea to Clone or Mirror the Elixir Golem. Doing so will cause more Blobs to enter the battle, giving your opponent a chance to collect more Elixir.

In general, when using the Elixir Golem in a deck, it is advised to have a strong defense to defend the counter push from the extra Elixir that you're giving your opponent.

With an Elixir Golem deck, you'll generally want to play passively, use your troops to defend, and use the Elixir Golem to counter push with your surviving defensive troops.