Do you pay attention to the feature of Clash Royale cards?

What is the role of Electro Dragon ‘s in Clash Royale? 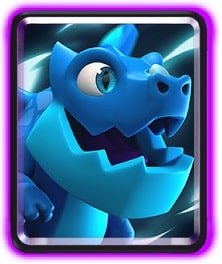 The Electro Dragon has a chain lightning attack wherein each attack that the Dragon fires has the ability to spread out to a maximum of two other nearby targets.

If there is a unit placed within three tiles of both a Princess Tower and the King Tower, the Electro Dragon will hit all three and potentially activate the King.

Because of this, avoid putting the Electro Dragon in Graveyard decks, as a King Tower activation can severely cripple future pushes.

The Electro Dragon can be a decent counter to a Goblin Barrel due to its attack chaining onto each Goblin. However, the Goblins will still get a few stabs in, so don't rely on the Electro Dragon as your only counter.

The Electro Dragon is quite a fragile unit. It is best used as a helper on defense where other troops can take blows for it or behind a tank on offense.

Since the Electro Dragon stuns and flies, it can be reliably used to counter charge units, especially those that cannot hit air like the Prince, Battle Ram, or Sparky.

A Lightning spell can take out an Electro Dragon up to one level higher immediately.

The Electro Dragon can be used to attack troops that are being protected by tank cards, like Archers behind a Giant for example.

Single-troop cards like the Musketeer or Mega Minion are great counters since the Electro Dragon will not be able to deal full damage to them because its attack will be unable to chain.

Electro Dragon is an ideal counter to Zappies because even though the lights on its back light up before attacking, stun effects will not reset its attack; destroying them with more than enough health left over for a counter push.

The Electro Dragon is very strong in Golem and Giant decks as it will be able to delay or kill support units or tank killers that are placed to counter the tank; as well as render Inferno Tower and Inferno Dragon useless, similar to an Electro Wizard.

What do you know about Electro Wizard character’s features in Clash Royale? 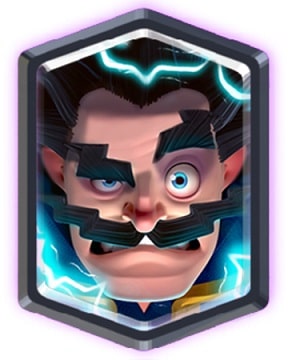 The Electro Wizard card is unlocked from the Electro Valley (Arena 11) or a Legendary Chest. He is a double-target, ranged troop with moderate hit points and damage. His attacks briefly stun his targets. He stuns and deals minor area damage upon deployment. An Electro Wizard card costs 4 Elixir to deploy.

Keep in mind that an Electro Wizard zaps two single targets at once. He does not do splash damage. Do not treat him as a splash support unit as he can still be swarmed without having to surround him.

Each of his zaps deal half of his full damage. Thus, when attacking two targets, the Electro Wizard will deal half the full damage to each target.

However, if there is only one target in his range, he will zap that target with both his hands, dealing the full damage.

Since he can attack two targets at once and has decent spawn damage, he is good against small swarms.

His spawn damage is capable of destroying an entire Skeleton Army and crippling the Goblin Gang and Minion Horde. Pair him with a Zap or Giant Snowball to completely destroy the Minion Horde; otherwise they'll most likely destroy him instead.

Because the Electro Wizard stuns when deployed and when attacking, the player can place him over any troop or building that has a channeled attack or ability. He can force Sparky, Inferno Dragon, and/or even an Inferno Tower to reset; he can prevent the Prince, Dark Prince, Ram Rider and the Battle Ram from charging; he can reset Elixir Collectors and spanners such as the Barbarian Hut, and Witch; and he can reset the wind-up (temporarily) before Bandit dashes, Mega Knight jumps, and the Fisherman's Hook.

The Electro Wizard has moderate health and moderately-high damage. He is capable of surviving a fireball although a Mini P.E.K.K.A will be able to one-shot him. Because of this, Electro Wizard is best used behind tanks such as the Knight or Giant. However, the Electro Wizard still deals considerable damage so don't ignore him.

The Electro Wizard is an excellent support unit in a push due to his ability to reset Inferno Towers. If the player has already destroyed one or two Crown Towers, he can drop the Electro Wizard on top of it and force it to reset and re-target. However, he is vulnerable to Fireball, so defending players should be mindful and space out their troops.

The Electro Wizard is capable of reliably countering Hog Rider, allowing only one hit on the tower. The surviving Electro Wizard can then set up a counter push.

The Electro Wizard can bring slow enemies to a crawl with his frequent attacks. Despite this, troops with slower attack speeds than the Electro Wizard such as the Golem and the Bowler will still be able to attack. Just like a normal Zap, an Electro Wizard's zap does not reset non-charge attacks but rather freezes the attack frame in place for a short amount of time.

Although the payoff is potentially high, the risk is equally as high. The opponent can play a troop in front of the unprotected Electro Wizard and quickly take it out with the help of their Princess Tower, leaving the shorter ranged troop also unprotected.

The Electro Wizard's spawn damage, when placed next to a Princess Tower, can hit all 3 Goblins from a Goblin Barrel. The Electro Wizard should be dropped shortly after the barrel's shadow crosses the river, and is around two tiles from it. This will not one shot them, but he will be able to prevent all but one stab on the Princess Tower thanks to his multi attack.

Alternatively, given the Barrel is played on the center of the tower, an Electro Wizard deployed at the front of the Tower is as effective in negating damage, assuming the barrel is the only card coming. It will Zap the front two Goblins and cause them to be taken out by the Tower before attacking, then he will one-shot the last Goblin. This method is much easier to execute.