Do you know the features of Clash royale account Cards?

Supercell has turned Clash of Clans account characters into cards in Clash Royale.

Where is Dark Prince appearance in Clash Royal? 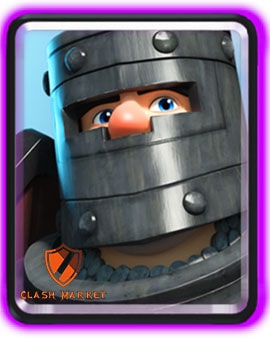 It can be beneficial to deploy a cheap unit to absorb the Dark Prince's charge attack before deploying your tank counter, as it will preserve more of your defender's health for a possible counter push. You can also use a stunning card like a Zap to reset his charge and deal a bit of damage to him.

Barbarians and Rascals are still a good counter as their staggered deploy means the Dark Prince's charge attack will only hit one of the units, allowing the others to stay alive and attack.

However, cheaper staggered swarms will still die to the Dark Prince fairly quickly, so it's not recommended to use them as a counter.

Excess damage from destroying the Dark Prince's shield will not affect his actual hit points. For instance, the Dark Prince has 199 shield hit points, and a Lightning does 877 damage to him, the extra 678 damage will be completely negated, making it ineffective to use high Elixir spells on him. The shield also makes him effective at countering high single damage units like the Prince or Sparky.

The Dark Prince fills multiple roles within one deck due to his moderate-high hit points, strong splash attack, and shield. He can be used to take out support units like a Musketeer behind a tank, absorb damage from big units with his shield, support pushes, and rush from the bridge.

Even though the Dark Prince deals less damage than the Prince, it is a good idea to take care of him before he reaches the tower as he can still deal a considerable amount of damage to the player's tower.

However, this combo is very vulnerable to air swarms like the Minion Horde, since the Dark Prince can't attack air.

An attacking Dark Prince in affiliation with the Prince is immensely effective. The Dark Prince can eliminate opposing low hit point troops while the Prince charges toward the enemy Tower, unhindered. This is known as the Double Prince combo and is also frequently used with a tank like the Giant.

This combo is vulnerable to air cards, so be prepared with the proper spells.

This strategy can be shut down with an Inferno Tower paired with swarm cards such as a tank and high-damage troop combo or by luring the troops to the middle. This lets both Arena Towers engage the pair, annihilating them. If you kite them far enough, they may do a lane swap and target the completely wrong Tower.

Since this combo costs a lot of Elixir, attacking in the other lane can be a good way to prevent the opponent from effectively executing it.

What do you think about The Dart Goblin card in Clash Royale? 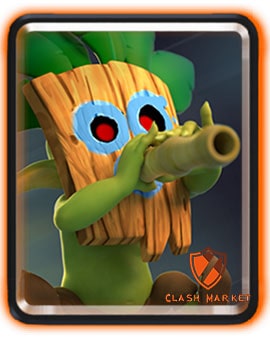 The Dart Goblin is best used behind a tank such as a Knight or an Ice Golem. The tank will absorb all the damage for the Dart Goblin, and coupled with the Dart Goblin's fast hit speed, the combination can quickly destroy a Crown Tower. However, due to the Dart Goblin’s low hit points, it can be countered easily with The Log for a positive Elixir trade or Arrows for a neutral Elixir trade.

The Dart Goblin's fast attack speed allows it to take care of small swarms quickly. He can also easily counter a Graveyard with the help of the Arena Tower. However, he can't survive or completely take out a Graveyard by himself.

Pairing the Dart Goblin with any distraction card, even something as cheap as Skeletons, can take out Elite Barbarians.

Pairing the Dart Goblin with a cheap unit like an Ice Spirit can deal significant damage to a Crown Tower or act as a quick defensive combo; however, it is vulnerable to spells like Zap or The Log. For example, the Dart Goblin can take down a Balloon with the help of a Crown Tower but he will not stop the Balloon's death damage from reaching, and thus damaging, the Crown Tower. This can be prevented by using an Ice Spirit.

The Dart Goblin is a very effective counter to spawner buildings, particularly the Furnace; he can snipe the Furnace if placed 4 tiles away from the river and one-shot the spawned Fire Spirits.

If there are buildings that are 4 tiles or less away from the river on the opponent's side, you can use the Dart Goblin to attack those buildings from your side of the Arena.

A Dart Goblin can be used to out-range the Inferno Tower and Cannon, which can make him an excellent asset in battle to destroy your opponent's defenses and further your advancement plans.

Note that the Tesla cannot be out-ranged because it is only vulnerable to damage when it comes out of the ground to attack.

His range and speed allow him to easily run and get some chip damage to a Crown Tower or even finish it off if it has very low hit points. Even if the Dart Goblin can be defeated in one hit by a Crown Tower, it will still get 2 shots off before dying and 4 shots at full health.

The Dart Goblin is excellent at pulling melee units towards the middle of your side of the map due to his very long range. He can engage the unit while they approach him.

The Dart Goblin can be used as a distraction card, but at a high cost. It is best used as cheap and effective air defense, that can kill off a Balloon at the bridge by itself, though it allows the death bomb hit to your tower. Used with another air defense such as an Electro Wizard, it can completely defeat a Raged Balloon. It is also indispensable when defending against a Lava Hound.

Skeletons can distract and completely deny the Dart Goblin for 2 less elixir, but requires some timing.

The Ice Spirit, if placed exactly 2.5 tiles away from the Dart Goblin, can completely stop him as well for the same cost. However, this is significantly more difficult to pull off.