What are Bowler abilities in clash Royale? 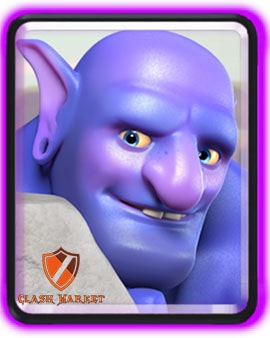 The Bowler card is unlocked from the Frozen Peak (Arena 8). He is a medium-ranged, area damage troop with high hit points and moderate damage. The Bowler throws massive boulders which roll linearly, damaging and knocking back his target and any other units in the boulder's path. A Bowler card costs 5 Elixir to deploy.

The Bowler's attack has a knockback effect that will push back all but heavy units such as a Prince. The knockback can also reset attack the animations of troops if they can be knocked back in the first place.

The Bowler has a linear attack that passes through all troops, allowing him to damage support troops behind a tank and clear swarms with ease. Maximize his damage potential by lining up enemies with the Tornado.

The Bowler can counter the Goblin Barrel if he is played behind the Crown Tower. His deployment timer should finish just as the Goblins spawn.

His high health, linear attack, and knockback effect makes him a strong defense against pushes, damaging both the tank and support units. As an added bonus, his inability to knock back tanks means he can separate the tanks and the support units, making them easier to deal with individually. He is extremely effective when paired with an Ice Wizard and Electro Wizard as their slowing effects coupled with the Bowler's knockback make for a near impenetrable wall.

The Bowler is one of the best counters against spawners. He can one-shot Spear Goblins, Fire Spirits and Skeletons. He can also take out Barbarians since he constantly delays them with his knockback, giving himself enough time to take them out. If he lands the final blow on a Tombstone, he will not only destroy it, but also destroy the Skeletons that would have spawned from it. This also makes him a very strong counter against the Witch since he can easily tank her attacks and will destroy any Skeletons she spawns.

Minions and Inferno Dragon can take out a Bowler without facing retaliation. Despite his splash damage, his slow attack-rate means that he can still be taken out by swarms like the Skeleton Army if he is surrounded.

He has a slow hit speed and low damage per second, so the player may need to back it up with troops with fast attack speeds and hard hitters such as the Musketeer and the Witch.

He can counter Elite Barbarians due to his knockback ability and high hit points, while preserving most of his health for a counter push.

He is not very good at countering tanks, due to their high health, their inability to be pushed back, and his low damage per second.

The Executioner can be a reasonable substitute for him. Executioner counters air, but has lower health and cannot counter ground mini-tanks. Bowler counters almost everything ground but isn't very effective against large, heavy troops that ignore his knockback effect, and he gets demolished by air troops as he cannot target them.

While player is defending against the Bowler, they should try not to place troops between the Bowler and their Tower, as his boulder rolls for a long distance and could lead to unnecessary Tower damage.

What do you think about Cannon card in Clash Royal? 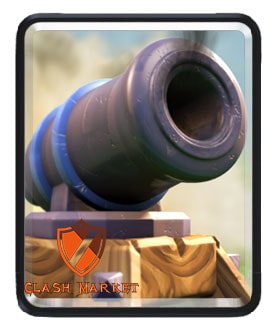 Always keep in mind that the Cannon Cart itself isn't a building and thus can't pull any building-targeting troops unless its cart has been broken.

Despite both forms having a large amount of combined health, the Cart being rendered immobile once its first form has been defeated means that it is best to put the Cannon Cart behind a tank or other high-hit point troops such as the Giant, like glass cannon cards. The tank will absorb all damage and the Cannon Cart will clear away units attacking the tank and eventually the Tower. Keep in mind that this combo is very vulnerable to swarms, so it is advised to bring an area damage spell or troops.

Placing a Cannon Cart in the middle of the opponent's territory when they have one Princess Tower destroyed can be a great strategy. The Cannon Cart's fast movement speed will make it quickly lock on to the remaining Princess Tower, potentially dealing great damage if left ignored.

Mini-tanks or high-damage units like the Knight or the Mini P.E.K.K.A. are great counters to Cannon Cart. They can survive multiple hits while dealing great damage to Cannon Cart, destroying it. Conversely, the Cannon Cart is an effective counter to mini-tanks.

Ice Golem can distract the Cannon Cart when it is within range of an Arena Tower, allowing the Tower to eliminate it. Place the Ice Golem quickly before the Cannon Cart targets the tower. Use a stunning card such as Zap or an Ice Spirit to make it re-target if this fails.

Swarm cards like the Skeleton Army and the Guards are effective at countering this card, since the Cannon Cart can only attack one target at a time, causing it to be overwhelmed and destroyed.

The Cannon Cart has enough firepower to destroy an equivalent-level Goblin in one hit. It is a good card for clearing away small units one by one so that the rest of a push can follow.

The Cannon Cart moves very fast, so it can be used to surprise an opponent at the start of the game or when they have little to no Elixir. This is especially devastating if paired with a spell such as Poison so that units like the Skeleton Army or Minion Horde are quickly cleared out.

A good way to counter the Cart is to use a Rocket on it when it is by the opponent's Princess Tower. If the Rocket hits them both, the Cart will lose its wheels and start decaying while the Tower takes a lot of damage for essentially one elixir. This is especially effective if there are other units by the Cart and Tower.

By placing the Cannon Cart in the middle of your territory as a defensive card, it can, with the assistance of both Crown Towers, defeat a Mega Knight for a positive Elixir trade.

A Cannon Cart can be strong when paired up with Graveyard due to its fast speed and high combined hit points, being able to distract the opponent's tower for a sufficient amount of time.

The Cannon Cart can be used to effectively counter a Goblin Barrel, due to its ability to one-shot them. It only lets the goblins get around 2-3 stabs.

A Cannon Cart placed in the middle can perfectly shut down a Mega Knight, but this requires precise timing, and it can sometimes be easier if you use Skeletons or Ice Spirit to absorb the jump so the Cannon Cart can be used in a counter-push.

If you have a tower down, placing this in the pocket can be good to get damage by utilizing its fast speed and good range.