What’s the use of Bats card in Clash Royale? 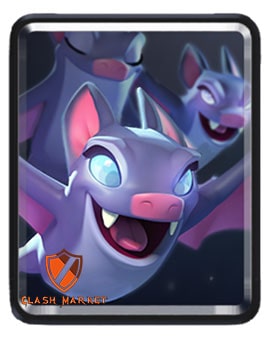 The Bats card is unlocked from Spell Valley (Arena 5). It spawns five single-target, melee Bats with very low hit points and damage. They are the same as those spawned by the Night Witch. A Bats card costs 2 Elixir to deploy.

Skeletons + Bats can stop a lone Sparky. The Skeletons will surround and stall the Sparky while the Bats damage her down. However, the player should be certain that the opponent does not have a quick spell to take care of the swarms.

The Bats are somewhat like faster, aerial Skeletons, except they cannot be used to pull units that only target ground units.

They can be a replacement for Minions. However, they have significantly lower hitpoints, slightly lower damage and thus can be defeated in one shot by many air-targeting troops like the Witch or the Princess Tower, or spells like Zap. They also pose much less of a threat when used for attacking.

Bats can be used to counter ground-attacking troops like the Knight, Valkyrie, Mini P.E.K.K.A. and Bowler. They can quickly defeat the troops with their high DPS if not countered by spells or splash units.

Bats can be used to fully counter many air-targeting troops such as Executioner, Musketeer, and Hunter, by placing them on top of the card when it comes within range of the defender's tower's firing range.

The Zap is a neutral Elixir trade for the Bats though they may be used to bait the opponent into using their Zap for other swarms after that, essentially making for a new card to be put in spell bait decks.

They can be used to counter the Graveyard for a 3 Elixir profit. Be careful, however. The Bats are vulnerable to spells such as Zap.

The Bats cannot counter the Golem completely because its death damage will defeat them, but they will deal significant damage to a Golem if not dealt with.

Do you know the capabilities of the Battle Healer in clash royal? 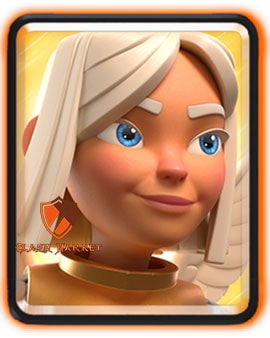 The Battle Healer card is unlocked from the Spooky Town (Arena 12). She is a single-target, melee troop with high hit points and low damage. A Battle Healer card costs 4 Elixir to deploy. She wears armor that is similar to the Knight's, but her breastplate is a golden color, and her sword is rather short.

She has a continuous healing effect that takes effect when she attacks, having four healing pulses with a small delay of 0.25 seconds between each one. When she is not fighting any unit for five seconds, she will begin healing herself. The amount of health healed per pulse is not consistent with the Heal spell.

Although she has low damage per second, her healing effect and high hit points will allow her to take out over half of a Princess Tower's hit points when left ignored, so she must be addressed.

Strong counters to a lone Battle Healer include mini tanks and swarms. The former will be able to out-damage her healing effect and survive with most of their health left for a counter push, while the latter will overwhelm her due to her slow attack speed and low damage per hit.

The Ice Golem cannot counter her due to its inability to attack units. However, in a larger push, it can be useful to kite her and other support troops into the other lane to separate them from the large tank and take advantage of the other Princess Tower's damage.

Air troops like Minions or Bats are effective counters to the Battle Healer, since she cannot attack air. Furthermore, these air troops can deal more damage than the amount she can heal herself. Be careful, though, because your opponent may bring spells like Zap or Arrows to take out these counters.

On defense, the Battle Healer works best with troops that are not immediately defeated from most spells, like the Hunter. Her healing effect will gradually build up as the push is taken care of, negating most of the spell damage dealt to the unit, allowing for a powerful counter push.

She is best placed at the front of a push due to her health pool and the fact that her area heal only takes place when she is in combat.

She can also be placed behind another tank. She will engage slightly later, but her surviving time will be longer and allow her to heal other troops longer.

She has a great synergy with the Elixir Golem. The Elixir Golem tanks for her, then she tanks for the Galeites and the Blobs while also healing them so your opponent will have more trouble gaining Elixir.

If the player has air units such as Minion Horde that they'd like to counterattack with, they should be mindful of where they are on the map before deciding to use the Battle Healer. She moves at a Medium speed, meaning Minions will outpace her fairly quickly, and may end up going in front of the Battle Healer and reducing the effectiveness of the push.