What do think about Bandit features in Clash Royale? 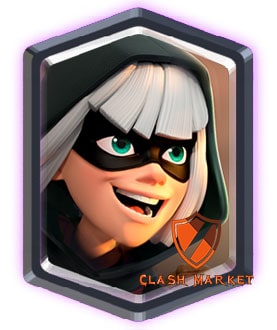 The Bandit card is unlocked from the Jungle Arena (Arena 9) or a Legendary Chest. She is a troop with moderate hit points and damage that has the ability to dash to nearby targets, dealing double damage if she hits a target with her dash, similar to a Prince's charge. She is immune to damage while dashing. A Bandit card costs 3 Elixir to deploy. She has white hair, wears a mask, and wields a blackjack.

The Bandit functions well as a cheap punishment or dual lane push card due to her dash mechanic making her an immediate threat. Completely ignoring a Bandit is often fatal as she will take the Princess Tower's health to just over 50%.

The defender can force the Bandit to target weak units, such as Skeletons, by placing the weak units in front of their stronger units in order to soak up her dash attack. This must be done, at the latest, right before the Bandit dashes.

The Bandit cannot dash towards targets that are within 3 tiles of her. Take advantage of this and place melee troops directly in front of her to prevent her from dashing. Without the dash, she cannot one shot any mini-swarm with hit points higher than or equivalent to a Goblin.

When there is a single troop that is one shot by the Bandit's dash between the bridge and the Princess Tower, place the Bandit down so that she will dash onto the troop, then dash onto the tower. This lets her get to the tower faster while countering a troop.

She pairs well with the Dark Prince. They are able to keep up with each other while not colliding too much, and the Dark Prince's splash will eliminate swarms like a Goblin Gang. When this damage is combined with the Bandit's dash, they can take out glass cannons like a Lumberjack.

The Bandit's invulnerability while dashing should not be overestimated. She can still take damage while charging up for a dash. Her charge prior to her dash attack can also be reset with a stunning attack or Freeze.

The Bandit is very effective against units that are spread out as her dash attack can easily cover the distance between the troops and deal double damage.

From the attacker's side of the Arena, the Bandit can dash to and attack any unit up to 3 tiles from the river.

The Bandit can dash through a Bowler's boulders and The Log without getting knocked back or damaged.

The Bandit can reset the ramp up of Inferno Tower and Inferno Dragon with her dash.

Goblins can easily shut down the Bandit for a positive Elixir trade.

The cheapest but riskiest counter to the Bandit is the Ice Spirit. Release it on the fourth tile and one tile in the other lane 1.3 seconds before it is in the Bandit's aggro range. This allows the Ice Spirit to escape her dash and freeze her, completely denying the Bandit.

A lone Bandit can be countered completely with just Skeletons. When she is charging up her dash, the player should place Skeletons two tiles from the centre to the Bandit’s attack side and 3 tiles from the King Tower. She will dash into the attacking range of both towers and be defeated right before she is about to attack the Princess Tower.

Bandit’s dash mechanic allows her to nullify the first hit from units that have a fast initial hit speed and long ranged melee attack, such as the Valkyrie or the Prince, making her a good counter to them.

In these cases, opponents may Zap the Bandit despite it being a negative Elixir trade in order to eliminate her dash from the equation and force another card out of the opponent. For example, a Prince's charge strike and Zap's damage will fully defeat a Bandit and leave the Prince unscathed.

When placed at a distance, the Bandit can counter a Sparky, so long as the Sparky's attack is fully charged before the Bandit begins dashing. Otherwise, she may dash early and be one shot by the Sparky, instead of nullifying all damage.

What are Barbarians abilities in clash royal? 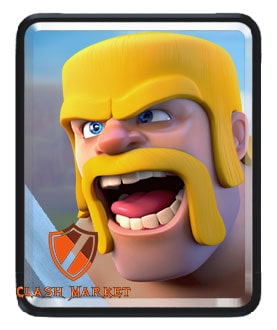 The Barbarians are a great option to use against enemy troops and Crown Towers, as the Barbarians have a moderate amount of hit points and damage, and are perfect for attacks with other tanks. Although they are very effective against single target troops like the Prince, Barbarians are susceptible to spells and troops which do area damage due to their slow move-speed. Their slow attack speed also leaves them vulnerable to swarms such as the Skeleton Army.

They are excellent for taking out low numbers of enemy troops such as the Prince or Musketeer on the player's side. The 5 Barbarians will quickly eliminate the unit if they are dropped directly on top of it, surrounding it.

They can also defeat a splash unit if placed directly on top of the unit, but failing to surround the splasher with Barbarians will cause them to take more damage than necessary. Note that this is ineffective against a charging Dark Prince, a Valkyrie or a jumping Mega Knight, as they have 360º splash.

The Barbarians can be effectively countered by most splash troops such as the Bomber and Wizard. However, be sure to place them at a distance so they are not immediately mauled. However, you must be careful as the opponent can use a Tornado or Freeze to immobilize or destroy the splash attacker, allowing the Barbarians to devastate the Crown Tower. Fire Spirits can cripple Barbarians, and are also very cost effective. Note that Fire Spirits alone will usually be unable to completely eliminate an entire group of Barbarians. Finish the Barbarians off with other troops or allow the Crown Towers to finish them off.

A powerful counter is the Fireball; the damage and radius of the spell is more than enough to one-shot the Barbarians. However, keep in mind that a Fireball 1 level lower than the Barbarians will not one-shot them.

Poison can also be an effective counter to use. Its damage over time will eliminate the Barbarians and any supporting troops. However, as with Fireball, it will not defeat Barbarians with a level higher than the Poison.

If the Barbarians survive, try supporting them with a tank in front to get some use out of them.

Rage used with Barbarians can do severe damage to a Crown Tower, as it is hard to stop because Rage increases movement and attack speed. The Barbarians together have high damage and can make short work of a tower before the opponent stops them.

Deploying Barbarians down the lane is futile and is essentially a waste of five Elixir unless the opponent is short on Elixir simply because of the numerous counters to the Barbarians and their slow move-speed. Always be ready to deploy a support troop along with the Barbarians, such as a tank, spell or glass-cannon to get the most value out of them.

It is a very bad idea to ignore them as they will be able to destroy a Crown Tower by themselves.

They are the best troops to take out enemy tanks due to their numbers (5 of them), high combined damage, and ability to tank most spells. Support troops will have trouble killing them due to their hit points. If the combo happens to be any ground-based splash damage card + ground-based melee tank, wait for the troops to cross the river. As soon as they cross, immediately drop the Barbarians upon the splash card. They will surround and destroy it quickly before moving on to eliminate the now unsupported tank. This can result in a large positive elixir trade. However, if there is more than one splash unit, the Barbarians are likely to be taken out immediately. Note that this may be ineffective against a P.E.K.K.A. as she can one-shot Barbarians up to 2 levels higher.