What is Archer’s role in Clash Royale? 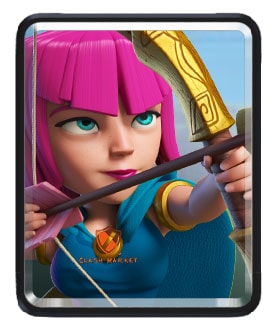 Archers are strong support units. This is because they have good crowd control, damage potential, and survivability for 3 Elixir since they will not be defeated by The Log at Tournament Standard levels.

Splitting the Archers behind of or in front of the King's Tower is a good way to cheaply cover both lanes while denying the opponent of the most possible spell damage value.

The Archers can be timed to split in the middle shortly before engaging with an enemy troop. If done correctly, both Archers will still target the enemy troop, while forcing said troop to travel further to defeat each Archer. This is especially useful versus area damage troops like the Baby Dragon, since they will usually have to spend twice as much time trying to take out the Archers.

They can be used effectively to counter low hit point troops like Minions, Spear Goblins, and Goblins. Although Archers are not splash troops, they are an effective counter to an unsupported Skeleton Army or Graveyard if paired with their respective Crown Tower at a safe distance. Their decent damage and fast attack speed plus the Crown Tower's damage and attack speed easily cut down the Skeletons without letting any of them damage either the Crown Tower or the Archers.

With the assistance of a Princess Tower, Archers are capable of taking out mini-tanks and glass cannons such as the Knight and Musketeer. However, they will be swiftly taken out by splash units, most noticeably the Executioner, Wizard and Bomber, so it is advised to have another troop placed to the side to tank for your Archers, like a Giant.

Miner paired with Archers is a cheap way to deal a surprising amount of damage as the Miner tanks for them.

They are similar to Spear Goblins since both are cheap ranged troops, but Archers have slightly better stats in every way except for speed, quantity and Elixir cost. Due to the Archers' health and damage, they are better suited for defense than Spear Goblins. For example, Archers can survive one hit from the Baby Dragon, which allows them to retaliate.

What do you know about Baby Dragon in Clash Royal? 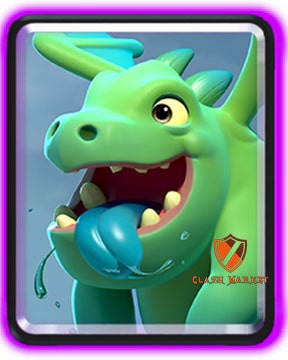 Receiving a Baby Dragon right after finishing the Tutorial is a big advantage in lower arenas since only a few troops can kill and survive it, like the Witch or the Musketeer. It has a level advantage over Commons and Rates since they can't be levelled up to match the Baby Dragon that quickly.

It can be countered by any air targeting troop if it is distracted by another unit. If the Baby Dragon is surrounded with troops that don't die in one shot to it, such as Minions or the Minion Horde, it will be taken out very quickly.

The Baby Dragon's area damage allows it to effectively support and protect tanks such as the Giant and the Giant Skeleton from swarms. This is more effective due to its ability to fly, allowing it to attack without endangering itself to as many cards.

However, because the Baby Dragon doesn't do much damage per attack, consider supporting it with other, high damage per second troops.

A lone Baby Dragon is quite easy to counter, as it does low damage and doesn't have a lot of health. Musketeer and Mega Minion are the most effective due to their high damage per second and similar Elixir cost to the Baby Dragon.

After the Baby Dragon has locked on to the tower, frailer troops such as the Spear Goblins, Minions or Archers can also work.

If the support of a Crown Tower is available, even tanks that don't target troops or air units can soak the Baby Dragon's hits for long enough that the tower is able to take it out on its own.

If split, Archers can take it out as the Baby Dragon won't splash on to the second Archer. This can also work with Spear Goblins; however, this requires incredibly precise timing and, in most cases, another card will need to be backing the Spear Goblins up.

Two reliable counters to the Baby Dragon are the Inferno Tower and the Inferno Dragon. Because the Infernos' damage intensifies over time against higher health units, they will take down the Baby Dragon without taking much damage in return. Although this isn't a positive Elixir trade, the former will often still stay alive long enough to defend a few other troops, while the latter can be used for a counterattack.

If the opponent has placed a tank in front of the Baby Dragon, an Inferno card will burn straight through both of them, negating the combo for a major Elixir advantage.

The Tesla can counter the Baby Dragon, but be careful when using it. If the opponent has something like the Royal Giant or Hog Rider, it is better to save the building for that.

A Tombstone can distract the Baby Dragon long enough for the Crown Tower to take it out.

Despite its low damage output, it is not wise to ignore a lone Baby Dragon on a Crown Tower, as its health pool allows it to rack up quite a bit of damage.

By placing a Baby Dragon at the leftmost or rightmost side of the Arena, it will be able to ignore buildings placed in the center of the Arena, as well as avoid being kited to the opposite lane.

When using this to support a Slow or Medium speed troop, such as a Giant, it is best to place the Baby Dragon a good distance behind the tank. Otherwise, the Baby Dragon will outpace them, and will get targeted first by the Princess Tower, which weakens the combo.